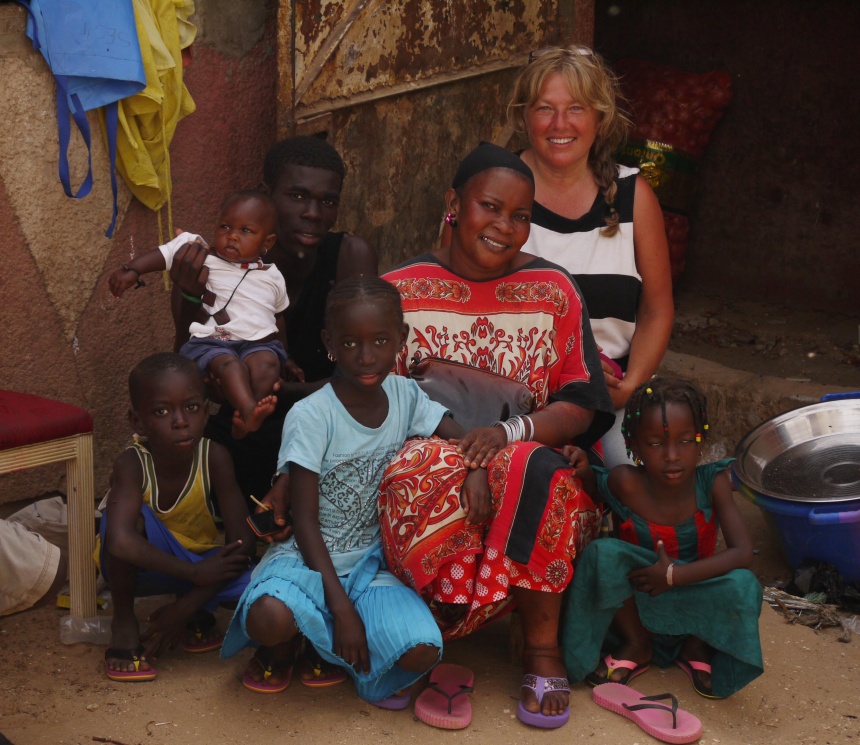 A 52-year-old Radium Hot Springs resident is working toward creating better lives for the children of Senegal, Africa.

“I’ve been travelling over there for the past six years,” explained Ms. Ellingboe when asked how the SOAS came to life.

She began travelling to Senegal after taking an online Spanish language course, which sparked a friendship with a Senegal man, known as Argo. Argo wanted to learn English from her and their language exchange sessions on Skype quickly turned into a friendship that took flight — literally.

“Through Skype, I saw what it was like over in Senegal, and it looked like a really amazing place to visit,” she said. “Really different from here.”

She developed a strong desire to see the wildlife, terrain and people of Argo’s country.

“When I would Skype there, I would see the people that were coming in and out of his shop, I’d see up and down the roads — what was happening outside,” said Ms. Ellingboe. “It was really amazing to see.”

Instead of planning a trip to Latin America, as she had originally envisioned, Ms. Ellingboe made the journey to Senegal for the first time in March 2010.

“That’s the twist of it all,” she said. “Initially, I was thinking I was headed for Costa Rica, but part of the language course I was talking required speaking to somebody who spoke the language that you wanted to learn and in that process, I got the call from Argo in Senegal to help him learn English. There wasn’t an advantage of learning Spanish for me, but I ended up helping him and that’s how it all came about.”

The sights, sounds and smells of Senegal gave her perspective about one of West Africa’s most stable countries.

“I’m over there working with the street boys. They’re called Talibe,” she explained. “In Senegal, there’s quite a problem with street boys.”

According to Human Rights Watch, there are at least 50,000 children attending Quranic schools, or daaras, where they are often abused, neglected and exploited by teachers and marabouts (religious leaders) who serve as their de facto guardians.

“A lot of the little boys from the countryside and the neighbouring countries get sent in to Dakhar, which is the capital city, for (religious studies),” added Ms. Ellingboe. “It’s quite a corrupt system. When the little boys get there, they’re put in the care of the marabouts and a lot of them are corrupt, so when they arrive, they basically get sent out onto the streets to beg for money and food to bring back to the marabout. It doesn’t really go to the boys. It goes to the marabouts who go and live a nice life.”

This falls under the International Labour Organization’s (ILO) definition of the worst form of child labour, which subjects children to brutal physical and psychological abuse, while the marabouts commonly neglect the children’s most basic needs.

Occasionally, the children fall prey to human trafficking through the marabouts.

“I shouldn’t say that there are no legit marabouts there that are doing a really good job with the boys, but a lot of them are corrupt,” she said, noting the number of children subjected to this system is growing.

With a strong desire to offer the boys an alternative, Ms. Ellingboe purchased some land in Senegal in 2014, where she hopes to offer some refuge to

“This past January, I started construction there,” she explained. “We’ve got the main house built now and just the starts of the rooms for the little Talibe. That’s what we’ve been doing right now.”

She has been meeting with outreach groups in Senegal who are working toward the same cause and hopes to fill the gaps in the care system for the youngest boys who are victims of the scam.

Ms. Ellingboe remains optimistic that by partnering with some of these non-profits, she will reach children of every age by offering them an opportunity to learn life skills to support themselves in Africa.

“There’s a good chance a lot of these boys will never leave Africa, so it’s important for them to learn how to support themselves.”

For more information about the program and sponsorships for the children, visit sonofafricasociety.com.